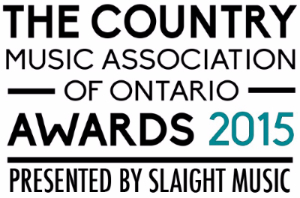 An Electrifying Night of Country Music!
Winners of The 2015 CMAO Awards

The Flato Markham Theatre was the scene of an electrifying night of country music on Monday evening for the 3rd Annual Country Music Association of Ontario (CMAO) Awards, presented by Slaight Music. The Awards Show was hosted by the Road Hammers’ Jason McCoy for the 2nd year in a row and he skillfully entertained the sold-out room, packed to the rafters with the best country music talent in Ontario.

The 2015 Awards Show wrapped up an action-packed two days for the CMAO which also included the Road To Independence (R2I) Spring Tune-Up Conference, presented by Slaight Music and supported by Ontario Media Development Corporation, on Sunday, May 24th and Monday, May 25th. The 2-day Conference featured knowledgeable industry panelists and keynote speakers, including the ‘New Faces, Going Places’ Industry Showcase on Sunday night, hosted by 2015 Female Artist of the Year, Michelle Wright and Ted Roop (Larche Communications). The Conference also featured a Keynote Interview with industry heavyweight, Derrick Ross of Slaight Music.

SINGLE OF THE YEAR (Sponsored by: Boots and Hearts Music Festival)
Small Town Pistols – I Only Smoke When I Drink

SONGWRITERS OF THE YEAR (Sponsored by: SOCAN)

I Only Smoke When I Drink – Small Town Pistols

MALE ARTIST OF THE YEAR (Sponsored by: TicketBreak)
Tim Hicks

GROUP OR DUO OF THE YEAR (Sponsored by: The Remington Group)
The Western Swing Authority

MUSIC VIDEO OF THE YEAR (Sponsored by: CMT)
Small Town Pistols – I Only Smoke When I Drink

RECORD PRODUCER OF THE YEAR (Sponsored by: Metal Works Studio)
Jason Barry
(Single – Night In Night Out by Genevieve Fisher)
(Single – One Of Us Is Lying by The Western Swing Authority)